NBA Season is right around the corner! Media Day Recap plus wild #NBASUMMER

By Colin Kennedy - 5 years ago in Entertainment, NBA News

Lebron addresses the Media first with the Kyrie Irving demanded trade. Which with the crazy NBA summer as it was, he went to the Celtics, probably the most difficult team the Cavaliers will face in the Eastern Conference! His words ” I had a ton of emotion, I wonder if I could do something different!?” Lebron told the media this afternoon with a bright smile and ready to get back to the Finals, but will Kyrie and the new looked Celtics stop him from seeing the NBA finals 8 times in a row!

Second major move was Paul George traded to the Thunder for the main piece of Victor Oladipo. Westbrook needed another play-maker and he got him in George.. The Media day coverage in OKC was mostly about Carmelo “Melo” Anthony coming to the Thunder via trade from the Knicks for the main piece of Enes Kanter 2 days ago. Melo says he would love to play the 4 man this season and a reporter joked about him coming off the bench, and Melo laughed it off! Westbrooks contract extension was a huge topic as he ducked the questions. The Thunder and Sam Presti had a A plus off season, look for them to battle for a top 3 seed in the West.

Third major move was Chris Paul to the Rockets, to join James Harden… Both players dribble and dribble and dribble stay tuned for this one and how it can play out, Melo wanted to come here for his first demands, but the Rockets didn’t have the assets to make the deal. The two CP3 and Harden played all summer together in summer leagues so they can develop the chemistry now.

The last major move and possibly my favorite and under the radar the most is Jimmy Butler traded to the TWolves for Zach Lavine for the major piece.. Butler rekindles his coach relationship with Tom Thibideo, but the major piece to the puzzle is Karl-Anthony Towns he was rated #1 player in the NBA to start a franchise today. Look for the Twolves to make a huge jump in record with Wiggins and Jeff Teague added in via trade. The Wolves could be leading the pack of the scariest team to face in the Playoffs.

Other key moves that we like Paul Millsap to Denver to team up with Jokic and Jamal Murray, Rudy Gay if he gets healthy, and Demarcus Cousins came to the Pelicans at the All Star break last year, but look for him and Anthony Davis to control games by dominating the paint. Also Gordon Hayward getting back with his college coach Brad Stevens with the Celtics teaming up with Kyrie!

One of the deepest rookie classes in a long time look for huge outputs for some rookies this year! 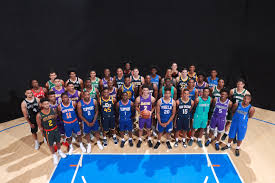 Probably the most hyped player that hasn’t even stepped on the NBA court yet is Lonzo Ball! With there Facebook TV show, his Dad making predictions out of this world, but some came true. They’re franchise is “Big Baller Brand” Lonzo team is the Lakers in his hometown, Magic Johnson has his eye on Lonzo and his performance, Lonzo said “the bullseye will be on him big this year” with all his hype and media coverage. Predictions are low for fans if the Lakers hit 500% we will be surprised, but look for other low end teams to make a move in standings with the youth so high now like with the Suns, and Miami Heat games will be a lot closer this year.

Media day had lots of opinions and reactions especially from Lebron about the Trump comments etc…We will not talk about this, we are a fantasy website…