Though you won’t find Stuckcee boasting about his 2015 DraftKings World Championship success, you will find him proclaiming his love for football any chance he gets.

“I think I started playing football at the age of 7 and loved watching football on TV with my dad and my brother,” Stuckcee proudly remembers. “I went to my first game out at The Ralph in Western New York in freezing temperatures and watched the Bills-Lions. I got to see Barry Sanders play and my love for football kind of really grew and blossomed.”

Stuckcee turned that love for the game into his day job by working various roles with two different NFL teams for a period of about 6 years. And when fantasy football became all the rage, he knew he had to be a part of that as well.

After only playing DraftKings for five months, Stuckcee catapulted himself from the top of his leader board to the Top 10 at the 2015 Fantasy Football World Championship. He earned a spot in the final 10 after leading the first-round of the FFWC for over four hours.
“The final 10 is such a surreal moment. I’m fortunate to be where I am. I mean football, my passion, what this is, translating to this is insurmountable. It’s just an awesome feeling.”

Stuckcee has had many exciting moments like this in his life. From the time he got a hole in one when he was 12, helped David Copperfield with a magic act, or the time he played in the World Series of Poker, but being in the 2015 FFWC Final 10 takes the cake.

In 2016, Ben continued enjoying DFS success. He won many tournaments and qualifiers as well as winning DraftKings King of the Beach tournament.

Ben is an integral part of the DKLegends team and is a key Pro for our NFL, MLB, NHL and PGA divisions. 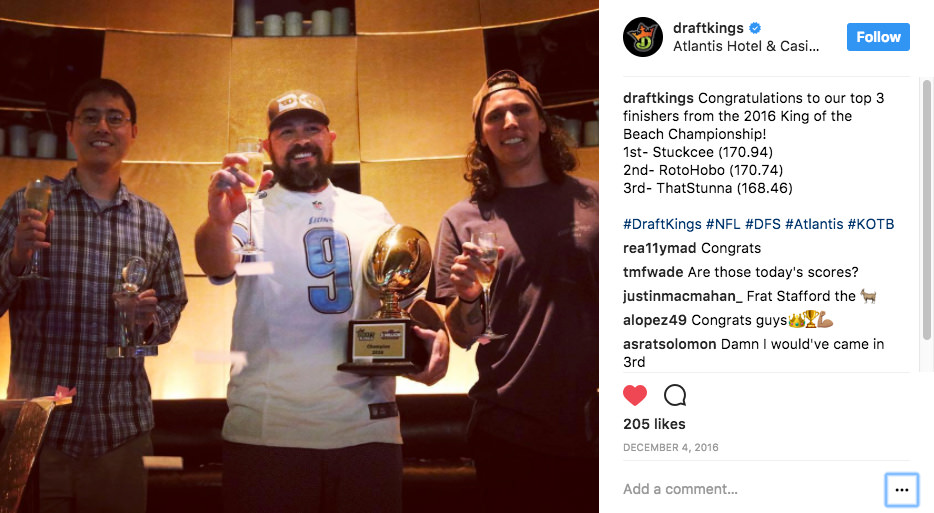