By Danny Moreno - 6 years ago in PGA News

At 7,000 feet above sea level, Club de Golf Chapultepec, which is replacing a Trump course as the host of this week’s World Golf Championships event, poses challenges.

NAUCALPAN DE JUÁREZ, Mexico — The 90-minute drive down the Florida Turnpike from Palm Beach Gardens to Doral after the Honda Classic is gone, replaced this season by a three-hour charter flight to Mexico, where golfers will compete in this week’s World Golf Championships event.

The change in venues prompted the predictable laments stateside. But to wax rhapsodic about the good old days when golfers decamped to Florida for the month of March to gear up for the Masters is to turn a blind eye to the game’s evolution.

“Everything kind of evolves and moves on in the world, and I think golf’s so stuck in tradition and things,” said Adam Scott of Australia, who won the Doral event last year. “I think we’re a bit sentimental with some things and we have to move on and let it go and take it for what it was.”

Four years before he became the 45th president of the United States, Donald J. Trump bought the Doral resort, a regular tour stop since the early 1960s, and spent $250 million on renovations to the grounds, only to lose the tournament when Cadillac’s sponsorship contract ran out last year.

Grupo Salinas, a Mexico City-based collection of companies primarily involved in retail, television and telecommunications, signed on as a sponsor in a seven-year deal and brought the tournament to Club de Golf Chapultepec.

The club is in an affluent neighborhood in Naucalpan, just outside Mexico City. At a venue with five-star accommodations and fine dining, the players are enjoying all the comforts of home — and apparently none of the residual discomfort from recent demonstrations elsewhere protesting Trump’s trade and immigration policies toward Mexico.

“I love it,” said William McGirt, who won the Memorial Tournament last year. “The golf course is fantastic. The people we’ve been dealing with are great. My experience has been very, very positive.” 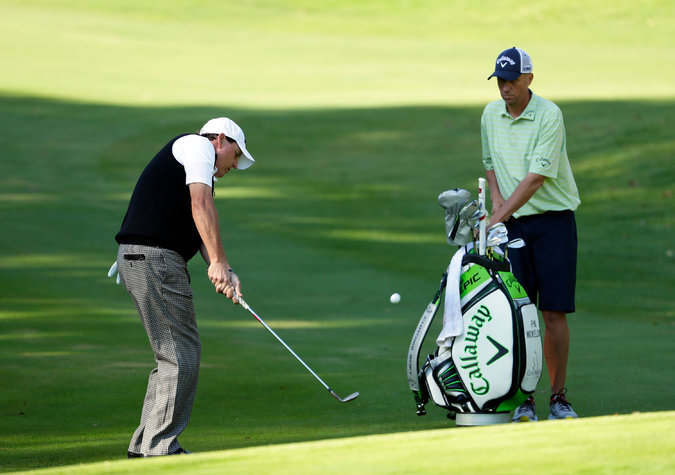 Phil Mickelson practicing on Wednesday. On the range on Tuesday, Mickelson’s water consumption was conspicuous.

He added: “You hear how dangerous it is and this and that. I haven’t seen anything that would indicate that it’s dangerous at all.”

Aside from reporters and fans untrained in course etiquette, the main hardship confronting the players is the altitude; the city is more than 7,000 feet above sea level. As Phil Mickelson warmed up on the range Tuesday, the empty water bottles scattered around his bag increased in inverse proportion to the number of balls in his pile. Jordan Spieth said he played nine holes and felt as if he had played 18.

“In the gym this morning, it was a lot harder to do what is normally a lot easier,” Spieth said, adding, “They say give it 24 hours, but that will probably continue to be something that’s a factor here is just maintaining strength and endurance throughout the entire four days of competition.”

Then there is club selection, which can be tricky given how far the ball travels in the thin air. Rory McIlroy, returning to competition after being sidelined since mid-January with a rib injury, marveled that he was hitting shots with his 8-iron that traveled 210 yards.“It’s so hard to get used to and trust in your mind that that club is going to hit the ball that far,” he said.