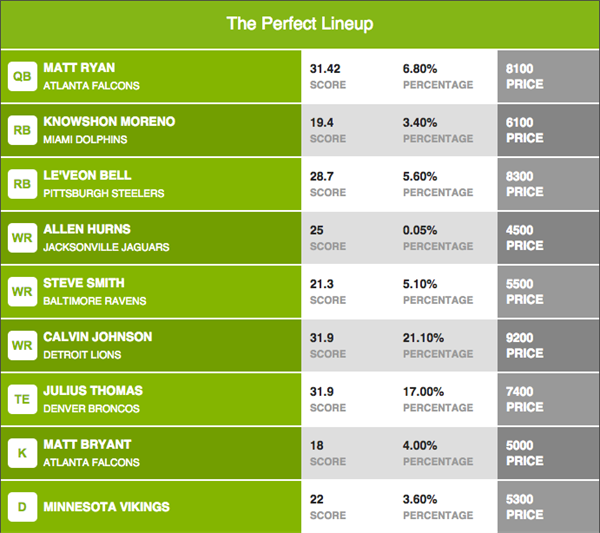 Daily Fantasy – How To Build The Perfect Lineup

By DKL Staff - 5 years ago in NFL News

Learn How To Create A Perfect DraftKings / FanDuel Lineup

Evaluating players is the most time-consuming part of your DFS preparation. There are hundreds of players to choose from every week, and you will need to be familiar with every one of them if you want to find an edge. If you just look at the box scores every week, you’re not getting the full picture.

Stats have context, and if you’re not watching the games and paying attention to how the stats are earned, you will be at a disadvantage. Some stats, like interceptions and YPC (yards per carry) for example, require context to understand fully.

The box score may show that Andrew Luck threw three interceptions on Sunday, but does this mean Luck performed poorly? It depends on the context of the interceptions. If T.Y. Hilton runs the wrong route and Luck puts the ball where Hilton was supposed to be, is that Luck’s fault? What if Donte Moncrief lets a pass bounce off his hands and it’s intercepted, is that Luck’s fault? Remember: the numbers don’t always tell the full story!

Yards Per Carry (YPC) is another misleading stat. A running back may have a 9.0 YPC, but that doesn’t always mean he is a good running back. A small sample size and a fluke big play can skew the numbers. You must watch the game film if you want to have a true understanding of the statistics. There are a lot of times when the stats don’t tell the full story, and evaluating players by using statistics alone is a good way to confidently lose in DFS.

Finding good sources of information about NFL players and their teams is the most important part of the player evaluation process. Football is a team sport, and one weak link can hamstring a team. It’s vital to understand how the pieces of a team fit together and how the performance of every piece affects the scheme.

Finding good sources of information for every team is important. Each team has many beat writers and reporters that follow the team closely and publish reports on their findings. Unfortunately, the media doesn’t have access to team meetings, and only some portions of NFL practices are open to the media. NFL teams release league-mandated injury reports, but they keep their weekly game plans (and featured personnel for the game plan) secret, very secret. We do not know what is going on behind closed doors; therefore, we must monitor media outlets and gather information to help us evaluate players and teams the best we can.

Not all media outlets are trustworthy sources of meaningful information. Some team specific sources just want to paint a pretty picture for the fan base. Larger media outlets like ESPN would rather focus their attention on narratives that are the most compelling, shocking or controversial. More Major media outlets are a business and they push what sells.

Good beat writers can give us insight into how teams and players are functioning. The best beat writers have been with the same team for a long time and have a track record of good information. Beat writers don’t get a lot of media attention so you may have to dig a little. As far as large media outlets are concerned, it’s hit or miss. If Adam Schefter breaks a story, you want to pay attention. If some ex-athlete, celebrity or the like has a “bold prediction” on ESPN, ignore it! They get paid to fill airtime, not prepare you for DFS contests. Personally, I don’t watch ESPN and I’m a better fantasy player because of it.

There’s injured, and then there’s injured. Experience and careful attention to injury/practice reports will help you decipher between the two. Tom Brady appeared on just about every injury report last season. Did his “sore knee” affect his play? Not at all. Some injuries are minor, but they still need to be listed per NFL rules. Some injuries may be minor, but can still affect how a player performs. Foot and hamstring injuries are usually not a good sign for wide receivers, and they often affect their performance. Core, rib and shoulder injuries are typically not good for running backs. Every injury needs to be examined and evaluated. The specifics of the injury, the mechanisms involved and the time table for recovery can tell us a lot and help us gain valuable insight into how we should value a player post-injury.

Why is it important to study stats, watch game film and review practice reports? You’re looking for value! DFS hosting sites set their player pricing to reflect a player’s fantasy value. If you want to maintain an edge, you need to find value before the hosting site can react and raise a player’s price. If you roster a guy or two that is underpriced, you can spend that extra salary cap space and upgrade other positions.

Boosts in value often happen as a result of an injury. If DeMarco Murry gets hurt, Derrek Henry’s value will greatly increase, and you will probably be able to get Henry at a discount for a week or two.

Matchups can also offer a value boost for players. It takes a lot of analytical work, but you can find players and teams that match up well against certain defensive schemes. But beware of the generic defensive rankings that many sites use. Most of the defensive rankings they use rely only on yardage averages and ignore the quality of teams they have played. Remember: stats have context!

When you can find good value, you maximize your salary dollars. Winning in DFS requires finding an edge over your opponents. Every dollar of your cap matters and every tenth of a point matters. That being said, don’t feel like you have to use up your entire salary cap every week. If you build a great lineup that you feel good about, don’t feel obligated to change your lineup just so you can spend your entire salary cap. You always want to find value to give yourself more cap space, but don’t let the salary cap rule you.

The pros and contributors at DK Legends study every play of every game. We also monitor the best beat writers and insiders in the NFL. It’s time-consuming work, but that’s what it takes to give our members the edge they need to win!