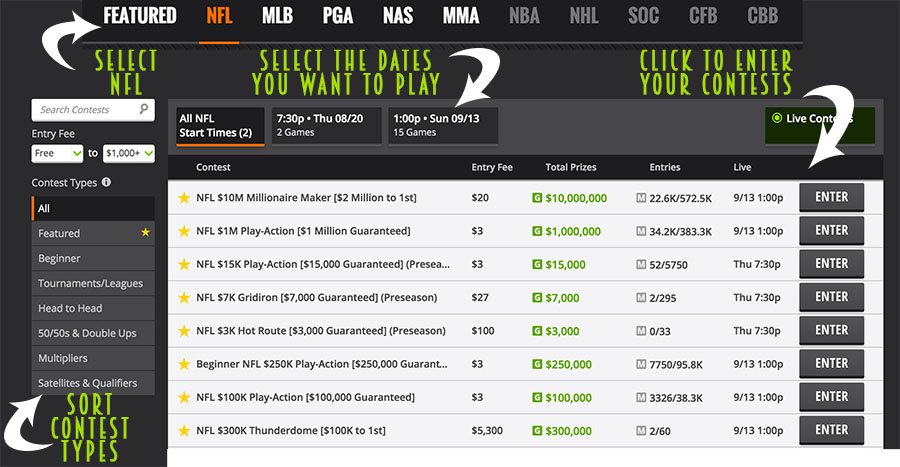 By DKL Staff - 6 years ago in NFL News

First and foremost: In all contest structures, on all daily fantasy sites like DraftKings.com, there will always be a percentage that is given to the hosting site. This is known as the “rake”. The rake is around 10% in most contests. The rake percentage will fluctuate depending on the type of contest, number of entries and size of the contest, but 10% is the baseline. Operating a major industry isn’t cheap; plus, how else are DFS sites going to pay for those commercials you see every 14 seconds during football season? But let’s be honest, it’s a relatively small amount to pay when considering all the fun and profit potential that comes from playing daily fantasy.

Before getting into the specific game types, let’s review some basics. Roster structures in DFS sites will vary so we’re going to focus on DraftKings just to keep things easy.

This is a common set up. Some sites will have 2 WRs instead of 3 and some will include a kicker position. You may also encounter a super flex position that will allow you to play any player including a second QB. Wherever you play, be sure that your strategy accounts for roster positions and values. To determine positional values you will need to pay close attention to your scoring system. Again, let’s use the DraftKings scoring settings as our example:

The following scoring plays will result in Points Allowed (PA) by your Defense/Special Teams (DST):

*Note: Points Allowed (PA) only includes points surrendered while DST is on the field – doesn’t include points given up by team’s offense (i.e. points off offensive turnovers). 2 point conversion returns are not included.

Familiarizing yourself with the scoring system is foundational to developing your playing strategy. QBs on average will score more points than the other positions; that’s why they carry a higher salary number. Point per reception (PPR) scoring gives increased value to receivers.  Notice also the significant yardage bonuses. You cannot win in DFS if you gloss over the scoring system. After you are familiar with roster construction and scoring settings, you are ready to choose what type of game you want to play. Here are the basics:

It’s as simple as it sounds. Mano-a-mano. You can set up a head-to-head (H2H) match-up with a friend, or enemy, and battle it out. Winner takes all minus the rake. You can browse the H2H listings and pick your opponent or you can host your own game. I would avoid matching up with sharks like danny1234, I hear he’s pretty good.

50/50s and Double-ups are basically larger field versions of H2H games consisting of anywhere from 10 contestants to thousands of contestants. The difference between the two is that a 50/50 game will pay out to the top half of contestants minus the rake.  Double-ups will pay out a true double return to the top 45% of players (still a 10% rake). There are some advantages to joining 50/50 and Double-up games instead of a H2H contests – the larger the field, the less likely you are to lose to an uncharacteristically high scoring team.

These are the games that can make you a millionaire. They are called guaranteed prize pool games because the amount of money paid out to winners is guaranteed in advance of the contest. So even if the contest doesn’t completely fill up, the payouts won’t be affected.  The payout structure is tiered so that only the top finishing players will get paid. GPP tournaments vary in size with the larger games having lower buy-ins and the smaller games having much larger buy-ins. The top 10-30% of finishers will get paid.  Large GPP tournaments are long shots but how else are you going to turn $27 into a million dollars in one weekend?

Hybrids Most daily fantasy football games fall into the two basic categories of 50/50 games or GPP tournaments but there are some hybrids of the two. These are a few:

Multipliers are very similar to 50/50 and double-ups, offering Triple-up, 5x and 10x structures.

Leagues are nearly identical to GPP but on a smaller scale and the payouts are not guaranteed. If a league isn’t filled then it is dissolved and the entry fees are returned. The payouts are tiered and usually very top heavy. You can create custom leagues with your friends or join a public league.

So those are the basics. All DFS sites do things a little differently. Just make sure that you review the scoring system, the roster structure, and the contest rules before you drop your hard-earned cash. Above all, have fun with it!  DK Legends wants to help you win. It’s what we do.