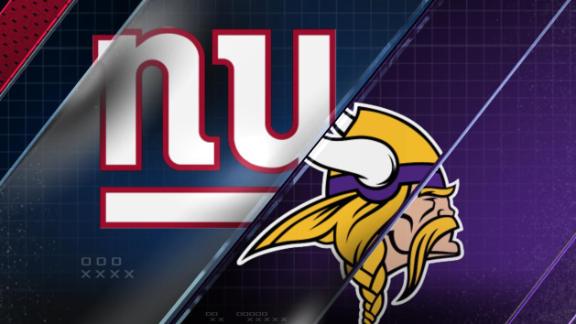 The Minnesota Vikings welcome the New York Giants into their new stadium on MNF. The Vikings are playing very good football while the Giants are trying to recover from a poor showing that resulted in a loss against a divisional opponent last week. The Vikings hold the edge in this all-time series 15-12.

In his career, Manning has a 3-5 record against the Vikings. In those 8 games he has completed 54.1% of his passes with a 5:14 touchdown to interception ratio. The Vikes seem to have had Eli’s number. OBJ, Sterling Shepard and Victor Cruz are all healthy and look to help Eli end that trend.

Vikings head coach Mike Zimmer is a defensive specialist and this defense is one of the best in the league. Through three weeks the Vikes lead the league in sacks per game (5), are second in INTs (5), and third in points allowed (13.3). They have not allowed more that 16 points in a game and last week sacked Cam Newton 8 times. The special teams play has been just as impressive.

Not many teams can lose their starting QB and franchise RB and still be competitive. Not only do the Vikings have a great defense, they also have zero offensive turnovers so far this season. Bradford has played well and boasts a 107.8 passer rating. Stefon Diggs is 20-325-TD though 3 games and Kyle Rudolph is developing solid chemistry with his new QB. Jerick McKinnon and Matt Asiata cannot fill the AP void but they are proving effective enough to help their team win.

The Giants may be scrambling

Week 3 was not kind to the Giants. They gave up 11 penalties for 128yds against the Redskins in a game that saw the Giants committing mental errors and displaying poor execution. Now the Giants are without Shane Vereen (IR) and most likely Rashad Jennings at running back and their secondary is banged up as well. They will need to find a way to play more disciplined football if they expect to find success against a very good Vikings defense.