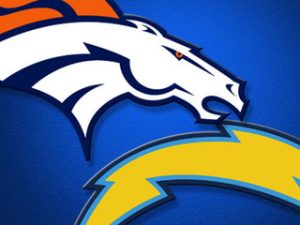 The Denver Broncos (4-1) will travel to sunny San Diego to take on the Chargers (1-4) for TNF. This will be the 113th regular season meeting between these two teams with Denver holding a 62-49-1 advantage in the series. The Broncos are looking like Super Bowl championships while the Chargers seem to invent new ways to lose every week. This AFC West show down will pit a high octane offense against one of the best defenses in the league.

San Diego boasts an offense that is ranked 2nd in the NFL in scoring and a 4th ranked passing attack is a big reason why. The fact that Rivers is playing so well (108.4 passer rating) without his top two targets (Keenan Allen and Danny Woodhead are both on I.R.) is a testament to how good he really is. He needs 125 passing yards in this game to eclipse Dan Fouts as the franchise’s all-time leader in passing yards.

Last week the Broncos lost for the first time this season and quarterback play was a big reason why. Rookie Paxton Lynch stepped in for injured 2nd year player Trevor Siemian and it didn’t go very well. Lynch was sacked 6 times, fumbled twice and threw an interception that let to an Atlanta touchdown. Denver managed only 267 yards on offense. Siemian is healthy enough to start this week and he looks to become the first QB since Roethlisberger to win his first 5 games as a starter.

Gary Kubiak was hospitalized over the weekend because of “complex migraines” and will not travel with the team. Special Teams coach Joe DeCamillis will step into the head coaching role.

It has been widely rumored that Mike McCoy will not be the Chargers’ head coach for much longer. The team has lost 10 games in a row to AFC West opponents. The team has had a 4th quarter lead in all of it’s losses this season and somehow manages to find new ways to lose every week. Rivers is playing great football but the team just can’t seem to get over the hump. If McCoy can’t engineer a miraculous turnaround he may be unemployed soon.

The Denver Broncos epitomize the saying “defense wins championships”. So far this season the Broncos pass defense ranks 3rd in the league and is giving up only 185.6 passing yards per game. The team has 19 sacks and has only allowed 3 passing touchdowns on the year. The Falcons found some success last week by running a spread offense that forced Denver’s linebackers into one-on-one coverage and you can expect Rivers will try more of the same.

Joey Bosa had a nice coming out party last week. He had two sacks, five combined tackles and showed the power and quickness that made him a first round pick. He played 10 snaps at RE, six snaps at LOLB and three snaps at ROLB. The Chargers need a spark on defense and Bosa has the potential to be a real difference maker.

Check us out on Twitter @thedklegends for last minute injury updates.